Georgia Law’s Dean Rusk International Law Center, for which I serve as director, will host a roundtable on the legacies of the U.S.-Vietnam War as part of next week’s visit here by Viet Thanh Nguyen, a University of Southern California professor whose first novel, The Sympathizer, won the 2016 Pulitzer Prize for Fiction. 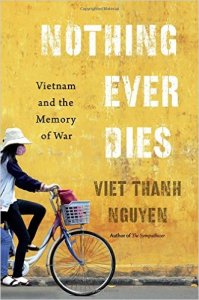 Entitled “Vietnam/War/Memory/Justice: A Conversation with Viet Thanh Nguyen,” our roundtable will take place from 4 to 5:30 p.m. this Tuesday, February 14, in the Larry Walker Room on the 4th floor of the law school’s Dean Rusk Hall.

The topic of the roundtable is drawn from Nguyen’s 2016 work, Nothing Ever Dies: Vietnam and the Memory of War, which itself was nominated for the 2016 National Book Award for Nonfiction. (Nguyen’s newest book, a short-story collection titled The Refugees, was published yesterday.) In Nothing Ever Dies, Nguyen writes:

The same may be said of justice; in particular, of efforts to right the wrongs done during armed conflict and similar extreme violence. These issues of transitional justice, memory, and war will be explored in the roundtable, at which Nguyen will be joined by:

► Tiana S. Mykkeltvedt, Georgia Law alumna, member of the Dean Rusk International Law Center Council, and partner at the Atlanta law firm Bondurant Mixson & Elmore, who was flown out of Vietnam as an orphan in April 1975 in what came to be known as Operation Babylift; and

Our Center is especially pleased to sponsor this event, given that our namesake, the late Dean Rusk, a Georgia Law professor, and served as U.S. Secretary of State during the first years of the Vietnam War. The Georgia Asian Pacific American Bar Association, the Vietnamese American Bar Association of Georgia, and Georgia Law’s Asian Law Students Association are cosponsoring the roundtable. It will be the last in a series of Global Georgia events hosted by other university units, most notably the Department of Comparative Literature and the Willson Center for Humanities and Arts:

► 4 p.m. Monday, February 13, in the university Chapel, Nguyen will deliver the 3d Annual Betty Jean Craige Lecture of the Department of Comparative Literature, entitled “Nothing Ever Dies: Ethical Memory and Radical Writing in The Sympathizer.” For information, contact Professor Peter D. O’Neill at pon@uga.edu.

(Cross-posted from Exchange of Notes)

100 from around world to take part in IntLawGrrls! 10th Birthday Conference on March 2 and 3 at Georgia Law