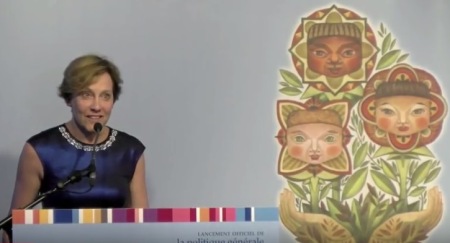 Delivering remarks on the Policy on Children of the International Criminal Court Office of the Prosecutor, launched in November 2016 at The Hague, Netherlands

Diane Marie Amann holds the Emily & Ernest Woodruff Chair in International Law at the University of Georgia School of Law. She has served since mid-2017 as a Faculty Co-Director of the Dean Rusk International Law Center, a position she took up after completing a two-and-a-half-year term as Associate Dean for International Programs & Strategic Initiatives.

She was appointed the International Criminal Court Prosecutor’s Special Adviser on Children in and affected by Armed Conflict in December 2012; her service has included assisting in the preparation and drafting of the ICC Office of the Prosecutor’s 2016 Policy on Children.

During her research-intensive Spring 2018 semester, Professor Amann was: a Visiting Researcher at the Oxford University Faculty of Law Bonavero Institute of Human Rights and a Visiting Fellow at Mansfield College; an External Scientific Fellow at the Max Planck Institute Luxembourg for International, European & Regulatory Procedural Law; and the inaugural Breslauer, Rutman & Anderson Research Fellow at the University of Southern California Shoah Foundation Center for Advanced Genocide Research in Los Angeles.

The author of more than four dozen publications, in English, French, and Italian, Professor Amann focuses her scholarship on the ways that national, regional, and international legal regimes interact as they endeavor to combat atrocity and cross-border crime.

Before entering academia, she practiced law in San Francisco, before state and federal trial courts and before the U.S. Court of Appeals for the Ninth Circuit. She was an Assistant Federal Public Defender, a solo federal criminal defense practitioner, and a litigation associate at Morrison & Foerster. She also served as a law clerk for U.S. Supreme Court Justice John Paul Stevens and for Judge Prentice H. Marshall of the U.S. District Court for the Northern District of Illinois. Professor Amann holds a Dr.h.c. degree in law from Universiteit Utrecht in the Netherlands. She earned a J.D. cum laude from Northwestern University School of Law in Chicago, where she served as a Note and Comment Editor of the Northwestern University Law Review and was inducted into the Order of the Coif, an M.A. in political science from the University of California-Los Angeles, and a B.S. in journalism, with highest honors, from the University of Illinois at Urbana-Champaign.