Delighted to be back in Washington for the 113th Annual Meeting of the American Society of International Law, and to have the honor of leading a roundtable aimed at exploring contemporary security governance.

Entitled Challenges and Prospects for International Peace and Security: UN Peacekeeping, NATO, and the UDHR at 70, the roundtable will take place 9-10:30 a.m. this Thursday, March 28. Participants (including some names different from ASIL’s printed program) are:

After noting that UN Peacekeeping, NATO, and the Universal Declaration of Human Rights all are marking their 70th anniversaries, the roundtable description asks:

“Have they failed to deliver on their original promise or have they adapted effectively to contemporary global realities? Is their future dependent on the continuation of Western hegemony and unity? Can they adapt to the changing nature of security threats, rising powers and a waning commitment to multilateralism? Are they instruments for peace, security and the promotion of international law? What challenges and opportunities lie ahead?”

Thanks to Jesse Clarke, member of the annual meeting planning committee and the Assistant Secretary, Office of International Law, International Division, in the Department of the Australia Attorney-General, for organizing what promises to be a stimulating discussion.

More on annual meeting participation by my colleagues from the University of Georgia School of Law Dean Rusk International Law Center, and me, here.

The global push to make the aggressive use of armed force a crime punishable by the International Criminal Court picked up another supporter this week.

Belgium deposited its ratification of the Kampala amendments to the ICC Statute on Tuesday, thus becoming the 12th ICC state party to support the amendments, which, as previously posted here, here, and here, define the crime and set out the paths by which persons suspected of responsibility for aggression may be called to account before the ICC.

Pursuant to the compromise reached at the 2010 ICC Review Conference in Kampala, Uganda, the amendments may not take effect before 2017, and then only after a further vote and the ratification by at least 30 states. Belgium’s joinder this week means the ratifications halfway point is near. Indeed, a tally of pledges made by other states both before and during this month’s annual meeting of the ICC Assembly of States Parties reveals that it is quite likely that the 30-ratification threshold will be reached well before 2017. (See my October post and the recent statements in the Crime of Aggression Twitter feed.)

But that was not the only crime-of-aggression news this month. Also at the Assembly meeting, just five days before Belgium deposited its joinder, the most vocal of ICC nonparty states weighed in: the United States’ top international criminal justice diplomat urged states not to make the crime of aggression punishable. That diplomat – Ambassador Stephen J. Rapp, head of the State Department’s Office of Global Criminal Justice – concluded his November 21 address to the Assembly by stating:

‘Another challenge with which the international community needs to grapple involves the crime of aggression.’

He made clear that U.S. statements against the amendments, made just after the end of the Kampala conference, still held:

‘The United States continues to have many concerns about the amendments adopted in Kampala, including the risk of these amendments working at cross-purposes with efforts to prevent or punish genocide, crimes against humanity, and war crimes—which provide the very raison d’être for the Court.’

And he urged a rethinking of the endeavor:

‘The States Parties were wise to create breathing space by subjecting the Court’s jurisdiction to a decision to be taken after January 1, 2017. The international community should use that breathing space to ensure that efforts to ensure accountability for genocide, crimes against humanity, and war crimes can be consolidated and that measures regarding the amendments requiring attention can be properly considered; …’

With that, Rapp concluded:

‘… and it is our view that States should not move forward with ratifications pending the resolution of such issues.’

His exhortation appears not to have moved some states, including some of the United States’ NATO partners – among them, Belgium, Estonia, Germany, Luxembourg, and Slovenia, which already have ratified, as well as Croatia, the Czech Republic, Romania, Slovakia, and Spain, which reportedly are working toward ratification.

Rather quiet in this debate are 2 states parties that belong to NATO and also hold permanent seats at the U.N. Security Council. How Britain and France proceed remains to be seen.

Americans judge U.S. intervention abroad based on the success of the military operation, concludes Wall Street Journal reporter Jess Bravin in an insightful analysis published today. Americans’ hindsight perception of military success – or failure – matters more than whether the President in power had the foresight to secure congressional authorization for the operation, Bravin adds.

He bases his analysis on a survey of the “mixed record” of military operations, dating to the 1941 declarations of war that launched U.S. military involvement in World War II. (credit for photo of President Franklin  D. Roosevelt signing declaration against Japan) Considered inter alia are:

► Interventions conducted pursuant to the 1964 Gulf of Tonkin Resolution (right) that led to escalation of the U.S.-Vietnam War, the 2001 post-9/11 authorization that preceded the U.S.-led counterassault in Afghanistan, and the 2002 authorization to use force in Iraq.

► Many interventions that were not preceded by congressional authorization – including the United States’ role in the months-long 1999 bombardment of Serbia, waged, as Bravin put it, “to stop Yugoslav President Slobodan Milosevic’s forces from attacking in Kosovo.” 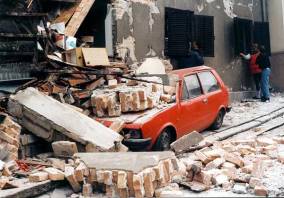 The Kosovo effort emerges as a foreign policy success in American eyes – Bravin writes that it was “conducted under the aegis of the North Atlantic Treaty Organization, subdued Milosevic; resulted in no U.S. casualties; and ended 12 days before the 90-day deadline the War Powers Resolution of 1973 sets for a president to withdraw U.S. forces unless he obtains congressional authorization.” (credit for 1999 photo captioned “A street in Belgrade destroyed by NATO bombs”)

In short, the Kosovo operation’s perceived success as a matter of policy – its contravention of the terms of the U.N. Charter is an altogether different matter – depended in no small way on its limited character. That policy lesson of constraint also informs Bravin’s quotation of my own comment on the draft Authorization to Use Military Force in Syria that the Obama Administration has sent to Congress. Here’s my quoted critique:

‘The draft uses multiple verbs to characterize the ‘objective’ of intervention – deter, disrupt, prevent, degrade. All are vague and thus susceptible to expansive as well as restrictive interpretation. The breadth of the authorization, and the consequent potential for an eventual widening of operations in Syria, should spark concern even among those who favor a limited strike.’