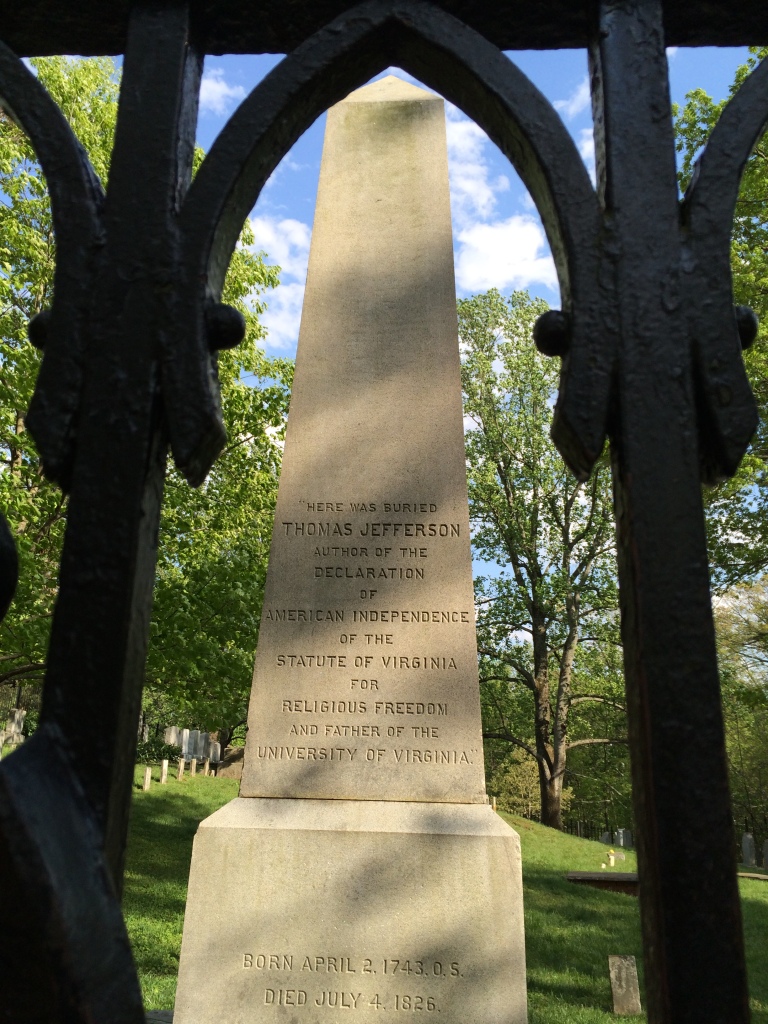 CHARLOTTESVILLE, Virginia – There is a grave-spinning serendipity in the fact that I began this week at the resting place of Thomas Jefferson. At the foot of his home, Monticello, lies the walled-in family graveyard over which the obelisk above stands sentry. Its all-caps inscription reads:

The Supreme Court cited that religious freedom statute Monday, along with another writing that associates Jefferson with the concept of separation of church and state. But in Monday’s judgment in Town of Greece v. Galloway, the citations did not appear in the opinion for the Court by Justice Anthony M. Kennedy, which held that the Establishment Clause of the 1st Amendment to the Constitution was not offended by the practice of opening meetings of an upstate New York town council with a prayer.

The citations occurred, rather, in the dissent that Justice Elena Kagan wrote on behalf of herself and 3 other Justices.  Contending that the principle of religious neutrality dates to the Constitution’s founding era, she cited the United States’ 1st, 3d, and 4th Presidents as examples of leaders who “consistently declined to use language or imagery associated only with” Christianity. She continued:

‘Thomas Jefferson, who followed the same practice throughout his life, explained that he omitted any reference to Jesus Christ in Virginia’s Bill for Establishing Religious Freedom (a precursor to the Establishment Clause) in order “to comprehend, within the mantle of [the law’s] protection, the Jew and the Gentile, the Christian and Mahometan, the Hindoo, and infidel of every denomination.”’

Then quoting Jefferson’s Virginia statute – for the principle that “opinion in matters of religion … shall in no wise diminish, enlarge, or affect … civil capacities” – Kagan articulated the dissenters’ view of what the Constitution requires:

‘Here, when a citizen stands before her government, whether to perform a service or request a benefit, her religious beliefs do not enter into the picture. … The government she faces favors no particular religion, either by word or by deed. And that government, in its various processes and proceedings, imposes no religious tests on its citizens, sorts none of them by faith, and permits no exclusion based on belief. When a person goes to court, a polling place, or an immigration proceeding—I could go on: to a zoning agency, a parole board hearing, or the DMV—government officials do not engage in sectarian worship, nor do they ask her to do likewise. They all participate in the business of government not as Christians, Jews, Muslims (and more), but only as Americans—none of them different from any other for that civic purpose. Why not, then, at a town meeting?’

It is a question Mr. Jefferson himself might have asked.