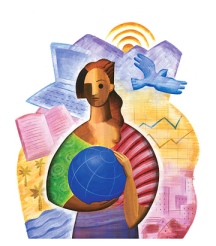 This International Women’s Day offers an occasion to celebrate the 20th anniversary of Reconceiving Reality: Women and International Law, an examination of international law, politics, and practice through a feminist lens. Perhaps it is better to say “feminist lenses,” given the essays’ embrace of the indeterminacy and dynamism of the contemporary world. (UNESCO image credit)

Rereading these essays 20 years on underscores how quickly some things have changed. With war then still raging in the Balkans, authors pondered how the not-yet-in-operation International Criminal Tribunal for the former Yugoslavia would fare. Several worried that sexual violence – already widely reported to be  a tool of that war – would be ignored. Their concerns place in high relief the significance of the ICTY’s eventual rulings on sexual violence, as well as the express prohibitions on sexual and gender-based violence in Articles 7 and 8 of the 1998 Rome Statute of the International Criminal Court.

Some essays could have been written today. That is both a testament to their timelessness and a critique of our times: the issues these essays address continue. No less now than then, the use of force and the meaning of peace, and women’s roles with regard to both, stir intense debate. No less now than then, theory and practice alike struggle with how prevent violence – and, when prevention fails, how to assure that perpetrators will be punished and victims redressed. This is evident in the slogan for this year’s International Women’s Day observance:

‘A promise is a promise: Time for action to end violence against women.’

One thought on “On International Women’s Day, honoring anniversary of pathbreaking volume”