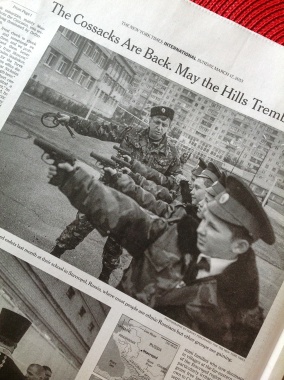 For this reader, most remarkable in a New York Times story yesterday was not the news that nationalist vigilantism is sweeping the steppes of Russia. Rather, it was the jump-page photograph at right, of a firearms drill featuring a row of  boys in uniform. Not to mention a color photo on Page 1: It depicts 3 uniformed boys, each of whom struggles to wield a whip.

All the boys appear to be under age 15.

Nowhere in “Cossacks Are Back in Russia” – a story that quotes adults who are raising units to do police-like work “with growing financial and political support” – does NYT reporter Ellen Barry mention the pictured training sessions. Nowhere does she explain for what purposes these boys are being trained, and nowhere does she consider such trainings in light of international law.

As international lawyers well know, Article 8 of the Rome Statute authorizes the International Criminal Court, in the context of international or non-international armed conflicts, to prosecute adults for “[c]onscripting or enlisting children under the age of fifteen years” into armed forces “or using them to participate actively in hostilities.” Russia is not a member of that instrument; however, as a state party to Additional Protocol I and Additional Protocol II to the Geneva Conventions on the laws of customs of war, as well as the Convention on the Rights of the Child, Russia has pledged to protect children under 15 from recruitment and from taking part in hostilities.

No armed conflict is under way, though the story does speak of tensions between ethnic Russians and other groups in the area surrounding Stavropol, a city fewer than 300 miles northeast of Chechnya. In any event, no armed conflict nexus is stated in Article 38 of the Children’s Convention, and at least one commentator has argued that it is not required in the context of the ICC, either. See Michael Cottier, Commentary on the Rome Statute of the International Criminal Court 466, 474-74 (Otto Triffterer ed., 2d ed., 2008).

Yesterday’s story thus is worth remark for 2 reasons: 1st,  because of its assertions of official support for this activity; and 2d, because its silence on the age of these participants speaks volumes about a need to entrench international norms in the global consciousness.