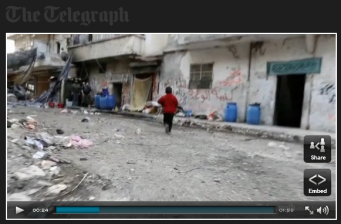 To be honest, it’s just too disturbing to embed, in full, this video of 8-year-old Ahmed smoking a cigarette and shooting his AK-47.  Ahmed’s struggle with the weight of his weapon, which is nearly as long as he is tall, is evident. He told Ruth Sherlock, reporter for the Telegraph of London:

‘Weapons are heavy I still have a difficult time shooting them, I can only shoot resting on the floor.’

Ahmed is a resistance fighter in Aleppo, Syria, an orphan since his parents were killed in a mortar attack. In the video, he says,

‘My mother died, and I kissed her.’

His adult comrades in arms say there are many children like Ahmed in Aleppo. These children are caught up in the conflict no less than those described in a prior post. No less than those in another video, which UN Dispatch embeds here as it notes that “only 20% of the $1.2 billion pledged to support humanitarian efforts has been received.” That shortfall adds an aid crisis to the list of woes that have befallen Syria.

One thought on “In today’s Syria, 8 year olds go to war”