SIRACUSA – For the 13th year in a row, this 2,700-year-old Sicilian city is playing host to a Specialization Course in International Criminal Law for Young Penalists. A hundred practitioners and scholars from around the world are considering sessions on the theme of “The Future of International Criminal Law in the Era of Globalization.” It’s my honor to join more than 2 dozen colleagues as a faculty member.

Sessions in the initial days of this 10-day course have provoked much thought, many questions, from attendees and presenters alike. This morning and last began with a lecture from our host, M. Cherif Bassiouni, Emeritus Professor at Chicago’s DePaul Law and President of ISISC, the Siracusa-based Istituto Superiore Internazionale di Scienze Criminali/International Institute of Higher Studies in Criminal Sciences. He voiced concern for civilian victims of armed conflict,  and sounded concern that international criminal law may be too fragmented. With so many legal regimes and institutions at play, he said, what 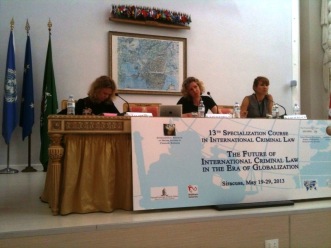 is called a system of international criminal justice has troubling working in fact like a system. This in turn may weaken the normative core common to these enterprises. Exploring these issues yesterday were, as depicted above, Larissa van den Herik, Elies van Sliedregt, and Beth Van Schaack.

Today William A. Schabas and I offered our thoughts. Among many other points, Bill delved deeper into the character of our global society, citing Harvard Psychologist Steven Pinker’s 2011 book, The Better Angels of Our Nature: Why Violence Has Declined. Meanwhile, I highlighted some positive effects that the multiplicity of regimes and institutions may have. To name 2:

► As demonstrated in external responses to the United States’ 2002 establishment of an indefinite detention center at its military base at Guantánamo Bay, Cuba, the presence of many sites for adjudication or other challenge to a state’s practice may compel a state to adjust; in contrast, if there is only one such legal regime or institution, a state more easily may circumvent its strictures. (A notable aside: back in D.C., President Barack Obama is slated to talk about GTMO in a policy address this Thursday afternoon.)

► As demonstrated by the fits-and-starts history of international criminal justice, it seems unlikely that policymakers will design a perfect institution on the 1st try. Inspired by U.S. Supreme Court Justice Louis Brandeis’ description of experimentation within the “laboratory” of the subnational state as “one of the happy incidents of the federal system,” I observed that simultaneous operation of multiple institutions might make it easier for each institution to learn, and adjust, from the lessons of the others.

The sessions continued with a fascinating exploration of commissions of inquiry, with speakers including 3 experts who’ve served on such commissions, Christine Chinkin, Serge Brammertz, and Philippe Kirsch. Up tomorrow is a survey of tribunals other than the International Criminal Court. Then more as the week goes by…not to mention much opportunity to enjoy the beauty of this ancient city.

At renovated Rijksmuseum, an account of centuries of Dutch globalization