AMSTERDAM – Newly reopened following a 10-year renovation, the Rijksmuseum now tells tales of globalization. It is thus far different and more provocative than the art-house of old.

A gallery named “The Netherlands Overseas” confronts visitors with the reach of the Dutch, who established the multinational Dutch East India Co. in 1602 and ranged widely for centuries thereafter. Adorning the gallery’s walls are portraits of Dutch ambassadors. One rides horses with a pasha in Persia. Another poses in Jakarta with his half-Japanese wife. In showcases below, an array of artifacts – the blue and white porcelain renowned in China and Delft alike, woolen caps worn by Dutch whalers, silverware that once held coffee, tobacco, spices, and spirits.

Throughout the museum Java and Molucca, India and Australia, Suriname and Brazil, North and West Africa, even Norway and Sweden, are invoked. Colonization is evident, not the least in the depictions of servants, some named, some not, beside the Lowlands envoys. Also present is international law, with major treaties marked by medals and epic paintings. Marked by the 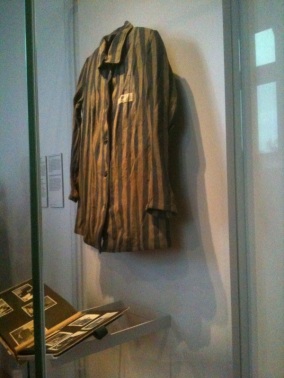 roomful of model ships above, moreover, is the warfare once conducted in the name of commerce and colonialism.

It is in the 20th C. gallery atop the museum that visitors encounter another sobering aspect of world events. The striped jacket at right once was worn by Isabel Wachenheimer, a 16-year-old German whose Jewish family had sought refuge in Rotterdam from the Nazis. After the Netherlands was occupied, all  were deported to Auschwitz, where her parents perished. She would be liberated at Mauthausen, a concentration camp in Austria where a fifth of the inmates were teenagers. Isabel, who became a U.S. citizen in the ’60s, kept her Mauthausen jacket. It’s described in museumspeak as “Germany, after 1938. Rags printed with blue ink, plastic.”

One thought on “At renovated Rijksmuseum, an account of centuries of Dutch globalization”