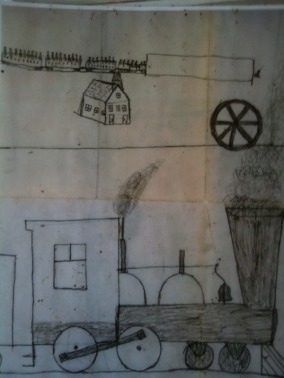 AUGUSTA – Who would have guessed that this city at Georgia’s border with South Carolina, now best known as host to a premier golf tourney, used to be home for the boy who grew up to be the United States’ 1st global President?  Yet that’s what we discovered on driving through Augusta a few days ago: On a downtown corner amid a modern urban landscape stood 2 sturdy brick houses fronted by a plaque that declared “Boyhood Home of Woodrow Wilson.”

Our visit revealed that one house used to belong to the family of Joseph Lamar, who would become a Justice of the U.S. Supreme Court. Next door 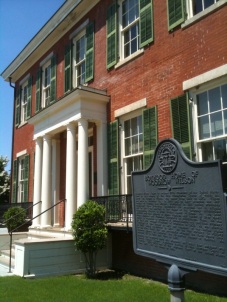 lived Lamar’s childhood friend, fellow preacher’s son, and fellow teammate on the neighborhood baseball team, “Tommy” Wilson. That is how the future President was known in the dozen years he lived in Augusta –  he even etched “T O M”, in cursive letters, on a downstairs window. It was not until adulthood that he would prefer his middle name, Woodrow.

Upstairs a bedroom featured boys’ twin beds, toys like a hobby horse and jacks, and drawings made by Tommy himself. Most interesting was the sketch at top, apparently drawn while looking out of a window in the upstairs drawing room. The foreground depicts the train, which trundled by at all hours. Behind the train lies the church where Rev. Wilson was a minister; behind it, wounded Union soldiers stream into the military hospital there in that post-Civil War, Reconstruction era. Some believe that the experience of watching those injured soldiers affected the boy – 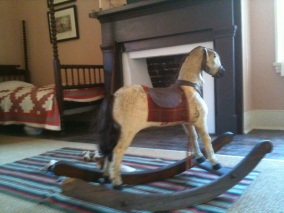 indeed, according to our guide, this childhood exposure to the tragic costs of armed conflict is said to have contributed to President Wilson’s reluctance to send U.S. troops into the 1st World War.

Much to love in Sotomayor's "World"