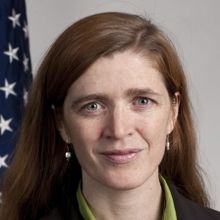 Surprised to read, in testimony prepared for a Senate Foreign Relations Committee hearing yesterday, that the nominee to become the United States’ Permanent Representative to the United Nations claims Georgia as her home – so much so that the state’s 2 Senators, both Republicans, were tapped to present her nomination to their colleagues. Samantha Power said:

‘I would also like to thank Senator Chambliss and Senator Isakson for their generous introductions. Growing up as an Irish immigrant in Atlanta, Georgia, I cannot say that the United Nations was a popular topic with my classmates at Lakeside High School. But it was in Georgia, while working at a local television station, that I witnessed footage of the horrible massacres in Tiananmen Square and resolved that I would do what I could the rest of my life to stand up for American values and to stand up for freedom. My Georgia friends supported me every step of the way, and I am now very proud to count these two great public servants among them.’

Power’s testimony then moved to her views on the significance of the United Nations in today’s world. Not long ago, I predicted that 5 principles, articulated in her most recent book and detailed in my prior post, would inform the approach of Power (above) to U.N. matters. (photo credit) Her prepared testimony provided a partial confirmation of that. Aspects of those principles were evident in the “three key priorities” she cited in her testimony. To be precise: consistent with the previously mentioned principles, 2 priorities focused on:

Prefacing these was another priority, one of:

Notably this priority, stated 1st in yesterday’s testimony, dwelt mostly on what Power characterized as a practice by which the United Nations’ “General Assembly and Human Rights Council continue to pass one-sided resolutions condemning Israel above all others.”