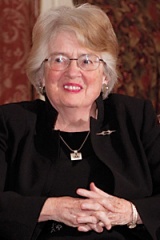 Delighted to see the name of Judge Patricia M. Wald among those set to receive the Presidential Medal of Freedom later this year. The White House announcement Thursday gave this terse account of her career:

‘Patricia Wald is one of the most respected appellate judges of her generation. After graduating as 1 of only 11 women in her Yale University Law School class, she became the first woman appointed to the United States Circuit Court of Appeals for the District of Columbia, and served as Chief Judge from 1986-1991. She later served on the International Criminal Tribunal in The Hague. Ms. Wald currently serves on the Privacy and Civil Liberties Oversight Board.’

That “international criminal tribunal” is, of course, the one that the U.N. Security Council set up to adjudicate offenses committed during the 1990s wars in the former Yugoslavia. Wald served as an ICTY judge from 1999 to 2001. As a onetime Wald clerk, Stanford Law Professor Jenny Martinez, wrote in a tribute appearing in “Women and International Criminal Law,” the special issue of the International Criminal Law Review dedicated to the judge:

‘When the U.S. government decided to nominate Judge Wald for the vacancy in The Hague, it was the modern equivalent of sending Justice Robert Jackson to Nuremberg. Judge Wald was unquestionably one of the most respected and admired federal judges in the United States. Nominating her to the ICTY said the United States took the court seriously, seriously enough to send one of its very best jurists to the posts.’

Martinez wrote that, at the ICTY, Wald:

► Helped reform procedures “to increase the court’s efficiency while ensuring fair trials.”
► ‘[C]ontributed greatly to the Tribunal’s jurisprudence”; for example, as a member of the Trial Chamber that in its 2001 Judgment in Prosecutor v. Krstić first used “the term genocide to the events at Srebrenica.”‘
► Demonstrated “courageous willingness to stand up for principle” in a way that “helped contribute to perceptions of the ICTY’s legitimacy”; for example, by presiding over the 2001 Appeals Chamber judgment that  reversed the convictions of 3 defendants in Prosecutor v. Kupreškić, who’d “been convicted based almost solely on one eyewitness’s testimony.” (I remarked on the significance of this decision in a 2002 American Journal of International Law casenote.)
► “Helped ensure,” through her “forceful presence in the courtroom,” “that gender-related violence was treated seriously and that victims were treated with respect.”
► “[C]ontinued to contribute to the project of international law since leaving the bench.” Wald’s served inter alia on the Open Society Justice Initiative board, as co-chair of the American Society of International Law International Criminal Court Task Force, as a member the President George W. Bush’s Commission on the Intelligence Capabilities of the U.S. Regarding Weapons of Mass Destruction, and as a member of the privacy/liberties board mentioned in White House notice.

Now 84, Wald continues to inspire by example. I was honored earlier this year by her presence at the ASIL Women in International Law Group luncheon where I delivered the keynote speech. A couple years before, Wald had provided essential support to IntLawGrrls’ production the ICLR special issue, attending and speaking at the 2010 roundtable where papers were presented, and publishing her own speech as Women on International Courts: Some Lessons Learned. That essay complemented the 3-part series Wald published in 2009 at IntLawGrrls, on what women want from international criminal law (part 1 here, part 2 here, and part 3 here). (photo credits here and here)