SALZBURG – I’m newly returned from this Austrian city, years ago my first European home during a semester abroad. Drawing me to the edge of the Alps was the Summer Session of Salzburg Law School on International Criminal Law, Humanitarian Law and Human Rights Law.  The overall theme for this 15th annual session, organized by Executive Director Astrid Reisinger Coracini, was the relationship of international criminal justice to the states and peoples of Africa. It was an honor to present a mini-course on “Children and International Criminal Law” to the scores of scholars and practitioners in attendance.

Other scores were on prominent

display throughout the baroque Altstadt. Concerts and opera, not to mention sculptures, paintings, and plays, filled indoor venues and outdoor squares – all part of the Salzburg Festival that runs through September 1. Though unschooled in opera, I was tempted to plunk down the considerable cost of a ticket to see Zubin Mehta conduct Verdi’s Falstaff just blocks away from Mozart’s birthplace. But then my colleagues William Schabas and Roger Clark, also there to teach at the summer school, alerted me to a more affordable option: an al fresco meal in front of a free Jumbotron broadcast of a 2004 Festival production of Strauss’ Der Rosenkavalier. 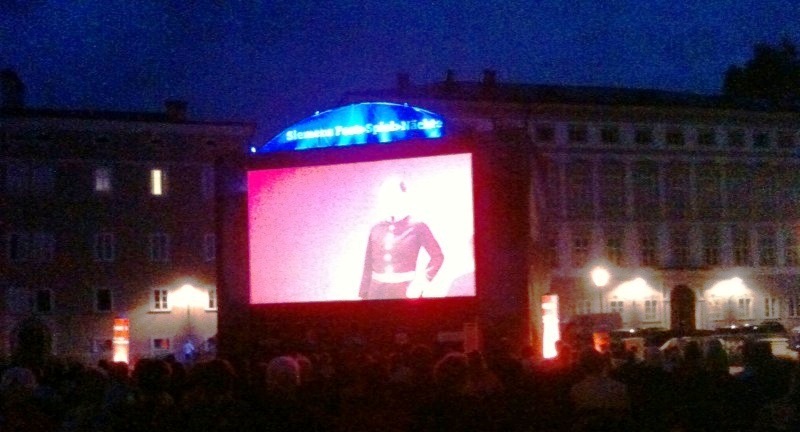 (As Schabas pointed out, this opera’s premise was not unrelated to my mini-course, for the libretto stresses the young age of the eponymous Kavalier, or member of the Austrian cavalry. By today’s standards the wily 17 year old was a child soldier.)

Echos of war could be detected not only in the strains of that just-before-World-War-I opera, and not only in the international criminal law classroom, but also in the news of the week. Likening foreign policy to 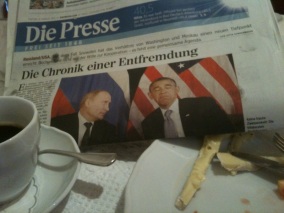 household intimacy, the media made much of the Entfremdung, or estrangement, between Vladimir Putin and Barack Obama, leaders of the countries that from the late ’40s through the late ’80s waged a Cold War (a period of conflict during which Austria had remained decidedly neutral). The paper’s account of sticking points between the 2 powers – nuclear disarmament; Snowden and spying; Syria; LGBT rights and the rights of dissidents like Magnitsky – made for quite a long détente to-do list. 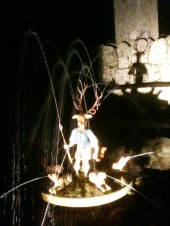 That sobering morning note called for night-time levity. And so we visited a favorite local amusement, the 400-year-old Hellbrunn Palace. There a whimsical Prince-Archbishop, as Salzburg’s erstwhile rulers were called, had built a garden of fountains. Some are lovely; some, like that of a mask whose tongue darts in and out, are goofy. All entailed an element of risk. For the mischievous had builder rigged seats, steps, and sidewalks with sprinklers. They turned on and off at unexpected points, leaving everyone both drenched and delighted.