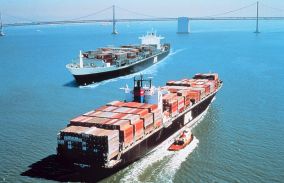 Romantic allusions to Years Before the Mast aside, working aboardship is hard labor. That work gained more protection today, as the Maritime Labour Convention of 2006, aimed “to secure the right of all seafarers to decent employment,” entered into force.

Article IV, meanwhile, proclaims that each member state “shall ensure, within the limits of its jurisdiction,” what’s been called a seafarers’ “bill of rights” –  rights to:

► “a safe and secure workplace that complies with safety standards”
► “fair terms of employment”
► “decent working and living conditions on board ship”
► “health protection, medical care, welfare measures and other forms of social protection”

Entry into force followed upon the recent ratification by a 48th state, the United Kingdom. The United States has not ratified, but 3 out of 5 permanent members of the Security Council have (France and Russia as well as Britain). Eight of the top 10 flag states – leaders in the registry of ships – also have joined: Bahamas, Cyprus, Greece, Liberia, Malta, Marshall Islands, Panama, and Singapore. (China and Hong Kong are the 2 leaders not listed.) Other ratifying states include island countries as large as Australia and as small as Barbados, and landlocked lands like Switzerland.