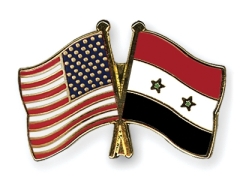 Not so long ago, the United States was looking to mend fences with Syria, as a 2008 Los Angeles Times interview with my colleague Derek Shearer, Occidental College diplomacy professor and former U.S. Ambassador to Finland, serves to remind.

Shearer had been interviewed on his return from a State Department-sponsored visit to Damascus, where he met with media and artists and gave SRO public lectures. He told the Times he was “excited … to see a country that has such great potential for doing well in this era of globalization,” and in that election year he looked forward to U.S. engagement with Syria if Barack Obama became President.

In an apparent easing of relations, in 2011, the 1st U.S. Ambassador to Damascus in years took office. But that thaw is a diplomatic casualty of more recent events.