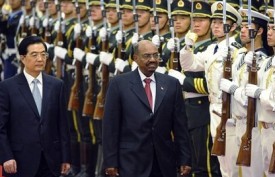 Though he’s wanted on charges of genocide, crimes against humanity, and war crimes alleged to have occurred in the western Sudanese region of Darfur (prior posts), President Bashir has traveled to numerous countries, including ICC states parties like Kenya and nonparty states like post-Gaddafi Libya. And though the Darfur situation came to the court by referral from the U.N. Security Council, the Council’s never reprimanded host states; indeed, one of the Council’s five permanent members, China, honored Bashir with a state visit in 2011. (credit for AP photo) Soon the United States may become the second P-5 member in that group: Bashir’s requested a visa to attend the just-opened session of the U.N. General Assembly, and as Julian Ku posted at Opinio Juris, an international agreement affords the United States little discretion to deny the request.

Notably, less than 2 weeks ago a Pre-Trial Chamber of ICC judges gave Nigeria a pass for admitting Bashir within its borders last July — as stated in the Chamber’s decision, “‘ostensibly to attend'” a special African Union summit on HIV/AIDS and other diseases. The judges noted that Nigeria had not invited Bashir, and further that Bashir made a “‘sudden departure'” before the summit ended. The decision suggested that this exit was linked to concern that Nigeria might execute the arrest warrant – in the words of the decision,

‘officials of relevant bodies and agencies of […] Nigeria were considering the necessary steps to be taken in respect of his visit in line with Nigeria’s international obligations.’

We’ll soon know whether Bashir will add U.S. entry and exit stamps to his busy passport.