Two Justices of the U.S. Supreme Court have signaled a willingness to reconsider precedent that permits state judges to impose the death penalty even after the jury has voted for a lesser sentence.

The signal came yesterday in a dissent from denial of the petition for certiorari in Woodward v. Alabama, No. 13-5380. The dissent’s author, Justice Sonia Sotomayor, wrote (citations omitted):

‘In Spaziano v. Florida (1984), we upheld Florida’s judicial-override sentencing statute. And in Harris v. Alabama (1995), we upheld Alabama’s similar statute. Eighteen years have passed since we decided Harris, and in my view, the time has come for us to reconsider that decision.’

Joining her in that estimation was Justice Stephen G. Breyer, who’d voted with the majority in Harris. (credit for Washington Post photo of Breyer and Sotomayor) Indeed, in that 1995 judgment, all the Justices then on the Court voted in favor of the state – all except Justice John Paul Stevens, who dissented in both the precedents Sotomayor named. Quoting Stevens’ dissent in Harris, she wrote: 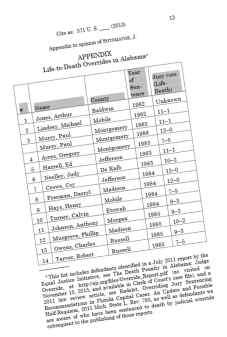 Supporting that conclusion was evidence in the Woodward record of state judges’ admissions that re-election worries may have motivated them to override jurors who, after balancing mitigating and aggravating circumstances, had voted for life imprisonment and against capital punishment. Fully 95 Alabama defendants have received death sentences in such a way, wrote Sotomayor, appending the list of those defendants to her opinion. In the last 13 years, “there have been only 27 life-to-death overrides, 26 of which were by Alabama judges,” Sotomayor added, commenting:

‘As these statistics demonstrate, Alabama has become a clear outlier.’

Whether the judicial-override sentence will go the way of 2 others Sotomayor cited – death penalties for juveniles and for mentally retarded persons, both no longer deemed constitutional – remains to be seen.