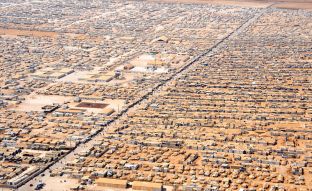 Officials have taken a step toward making it easier for refugees of armed conflict to find refuge in the United States.

Accounts of the world’s too-many civil wars often include astronomical numbers of persons in flight: nearly half a million in Central African Republic, more than 2 million in Syria, and so on. Precious few such refugees have found safety in the United States – only 31 Syrians last year, though camps like Zaatari in Jordan (right) house hundreds of thousands. (photo credit)

This is due in part to 8 U.S.C. § 1182, which bars anyone deemed to have given material support to listed armed or terrorist groups. The list of such groups is extensive. So too the list of what U.S. officials have deemed acts of “material” support – by way of example, an act as unavoidable as “pay[ing] a toll or tax to a terror group to pass through opposition-occupied territory.” Some 3,000 persons already in the United States are said to fear ouster based on this bar, which has prevented untold others from entering the country.

But the list of proscribed acts was trimmed last Wednesday, when a joint notice was published in the Federal Register. The notice stated that the heads of the U.S. Departments of Homeland Security, Justice, and State had determined that the terms of Section 1182

‘bar certain aliens who do not pose a national security or public safety risk from admission to the United States and from obtaining immigration benefits or other status.’

Among other caveats in the Secretaries’ Notice of determination, such acts must have been performed absent any intent to aid terrorist activity.

The notice is not explicit on the extent to which the new ease-up might apply to certain refugees mentioned on page 1 of this 2007 report; that is, children who, in time of civil war, were forced to provide an array of services to rebel or terrorist groups.