This year will be the 9th that international prosecutors and other experts gather at the lovely lakeside Athenaeum Hotel, located at the Chautauqua Institution in upstate New York, in order to take stock of developments in international criminal law. As its title indicates, this year’s theme commemorates two milestones: “‘The Wrongs We Seek…’ The Srebrenica Massacre 20 Years On — and in Commemoration of the Opening of the International Military Tribunal at Nuremberg 1945.”

And it’s the 5th that IntLawGrrls blog has had the honor of selecting the person who will deliver the lecture in honor of Katherine B. Fite, the State Department lawyer who helped Chief U.S. Prosecutor Robert H. Jackson with the drafting of the London Charter and other duties in preparation for the 1st postwar trial at Nuremberg. (My own 2011 Fite Lecture, which describes Fite’s career, is here.) 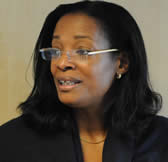 ► This year’s Fite Lecture, scheduled for the morning of Monday, August 31, promises to be a great conference-opening keynote. Sellers (right) serves as International Criminal Court Prosecutor Fatou Bensouda’s Special Adviser for Prosecution Strategies, having been appointed in December 2012 (at the same time that yours truly began similar service on issues related to children in and affected by armed conflict, and IntLawGrrl and Washington University-St. Louis Law Professor Leila Nadya Sadat on issues related to crimes against humanity). That role succeeds prior service as a legal advisor and trial attorney at the International Criminal Tribunals for Rwanda and for the former Yugoslavia, as well as expert consultancies to UN bodies, on matters related to children, gender, women, and investigations. Sellers, who is a Visiting Fellow at Kellogg College, Oxford University, has received multiple honors, including the American Society of International Law Prominent Women in Law award. (photo credit) 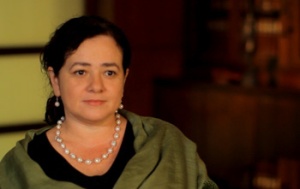 ► At lunchtime on the same day, Dr. Claudia Paz y Paz (left) is scheduled to deliver the Dialogs’ annual Clara Barton Lecture. (photo credit) As we’ve detailed in prior posts here and here, Paz y Paz is the former Attorney General of Guatemala who pursued a genocide prosecution, in national court, against Efraín Ríos Montt, the dictatorial President of Guatemala during the early 1980s. (Just last month, he was ruled mentally unfit to stand retrial on the charges.)

► The closing keynoter, after lunch on Tuesday, September 1, will be the Honorable Patricia Wald (right), who served as an ICTY judge at that tribunal’s first Srebrenica genocide trial. (photo credit) Her tenure at the ICTY followed a long career of service in the U.S. government, most notably as the 1st woman to serve as Chief Judge of the U.S. Court of Appeals for the District of Columbia Circuit. She continues to serve as an expert and advisor on numerous panels related to security and international criminal law. She honored IntLawGrrls in 2009 by contributing a series of 3 superb posts, available here, here, and here.

Yours truly will have the honor of introducing Judge Wald.

In addition to these headliners, the Dialogs will feature breakout porch sessions, led by us experts-in-residence (on subjects such as “The legacy of the International Military Tribunal at Nuremberg,” “Legacy of the ICTY,” and “Role of the ICC in the Middle East”), as well as many other events. Of particular note:

► Screening of Seeking Truth in the Balkans, a 2014 documentary on the work and legacy of the ICTY, by Erin Lovall and June Vutrano.

► Roundtable on the July 1995 “Srebrenica Massacre,” in which upwards of 8,000 Bosniak boys and men perished. Sadat will moderate a discussion among Judge Wald, former U.N. Legal Counsel Hans Corell, Professor William A. Schabas, and Mark Harmon, who resigned just weeks ago from his post as a judge at the Extraordinary Chambers in the Courts of Cambodia, the hybrid tribunal set up to try persons accused of criminal responsibility for the 1970s Khmer Rouge reign of terror.

► Keynote address by a representative of the Mayor of Nuremberg, the German city where the post-World War II Trial of the Major War Criminals opened 70 years ago, on November 20, 1945.

► Issuance of the 9th Chautauqua Declaration.

More information, including a registration form, may be found at the website of the Robert H. Jackson Center, a primary sponsor, here.