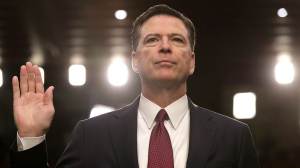 Pleased to have contributed to reporter Sean Illing’s Vox roundups of academic commentary on yesterday’s testimony by former FBI Director James B. Comey before the U.S. Senate Select Committee on Intelligence. (photo credit)

Illing 1st asked whether, in “Comey’s introductory remarks or in his exchanges with senators,” the witness made “a case that President Trump attempted to obstruct justice.” My response here.

Next, he asked about a statement released by the President’s personal lawyer, which said that Comey had engaged in “unauthorized disclosure of privileged information.” My response, which treated the constitutional doctrine of executive privilege, here.