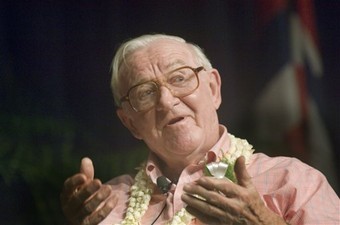 “For those of us who enjoyed the rare privilege of clerking for Justice John Paul Stevens … there was only one Boss. And it was not Bruce Springsteen.”

WASHINGTON – So begins “Justice John Paul Stevens leaves behind a rich legacy that we cannot forget,” the op-ed I published last week in the Washington Post. It offers personal and professional reflections on the Supreme Court Justice, for whom I served as a law clerk in OT’88.

I’d written as well in the past about aspects of his career:

Memorial services for Justice Stevens begin this morning, with a ceremony in the Court’s marble rotunda, where he will lie in repose till midnight, with interment at Arlington National Cemetery tomorrow.

It’s an honor to be in attendance at these historic events.

(At top, 2007 AP photo (credit); below, poster for 2009 symposium I organized while a law professor at the University of California-Davis