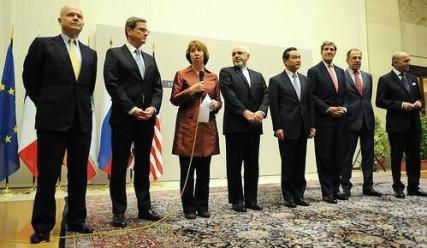 The wee hours in Geneva today brought news of an agreement to regulate Iranian nuclear development, blocking nuclear weaponry and easing global sanctions. The agreement’s a victory for what, back in 2007, I dubbed the talking cure – a welcome turn of events after decades in which tensions escalated even as telephone lines remained silent. (It is just 8 weeks since the leaders of Iran and the United States talked for the 1st time in 34 years; just 5 days since the leaders of Iran and Britain talked for the 1st time in a decade.) The European Union-Iran statement on the agreement is here, text of Joint Plan of Action here, and a White House fact sheet is here.

The guy getting credit for all this is a woman. She’s Catherine Ashton, the coal miner’s daughter and onetime activist in the Campaign for Nuclear Disarmament who’s served since 2009 as the European Union’s 1st-ever High Representative of the Union for Foreign Affairs and Security Policy. Ashton’s early days in that post were rocky, but she persevered. She’s been in the trenches negotiating with Iran for years. The Guardian‘s Julian Borger reports that during this week’s diplomatic marathon at Geneva, while other delegates nicked out for pilaf or pizza, “Lady Ashton, the EU foreign policy chief steering the talks, often just made do with bar snacks.” And so today the media are painting Ashton as a hero – “from ‘zero’ to hero,” as the Telegraph of London rather snarkily put it.

Pivotal is the quality that an unnamed Brussels diplomat assigned to Ashton: “emotional intelligence.” There will be need for much of that as leaders work to win approval of the deal in their own states.  Most notably the United States, where some same-day reactions indicate more fondness for the hostile old status quo than for a chance to edge toward a calmer international future.

Notable in the just-released White House recap of its efforts to prevent mass atrocities is the foregrounding of 2 actions this year:

► Enactment in January of “bipartisan legislation to enhance our ability to offer financial rewards” – up to $5 million – “for information that helps to bring to justice” selected international indictees, among them “Joseph Kony and other senior leaders of the Lord’s Resistance Army, as well as Sylvestre Mudacumura from the Democratic Forces for the Liberation of Rwanda….”

► Developments in March, when “[t]he United States facilitated the voluntary surrender of Bosco Ntaganda” to stand trial “for war crimes and crimes against humanity….” 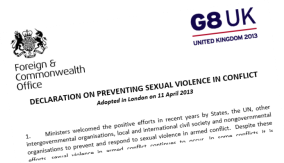 What’s notable is that both actions – like others noted in this commentary by Professor David Kaye – come to the aid of the indicting organization, the Hague-based International Criminal Court.  The same is true of an action not mentioned in the recap; that is, the Declaration on Preventing Sexual Violence in Conflict adopted at a mid-April London meeting. Paragraph 5 of the Declaration concludes:

‘Ministers emphasised the need for further funding support for victims and called on the international community, including the G8, to increase their efforts to mobilise such funding, including to programmes such as the ICC Trust Fund for Victims and its implementing partners.’

“Ministers” refers to the Foreign Ministers of the European Union and all members of the G-8. Thus joining the Declaration were 2 countries not party to the ICC’s Rome Statute: Russia and the United States. (credit for AFP photo made at the G-8 meeting of Foreign Ministers – from left, 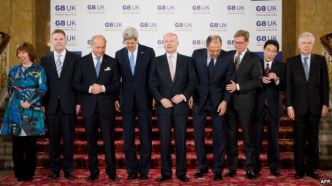 These actions prompt examination of the potential extent of U.S. support for the ICC – in particular, given the G-8 Declaration, U.S. support for the Trust Fund for Victims. Would U.S. financial contributions to the Trust Fund for Victims contravene the American Service Members Protection Act? A preliminary look at the question indicates that they would not.

Section 2004 of the Act prohibits the giving of various forms of “cooperation,” “support,” and “appropriated funds” to the “International Criminal Court.” Section 2013(6) has the following definition:

The definition gives rise to a question: Does the Trust Fund fall within that statutory term “the court”?

Despite some writings on the workings of the Trust Fund (e.g., here), there appears to be little in-depth scholarship on the organizational relationship between it and the Court. An expert on international organizations ought to take this on.

Still, ICC documents seem to set the Fund apart from the Court; that is, the Trust Fund is established to benefit victims of crimes in the Court’s jurisdiction, but is not expressly itself within the Court’s jurisdiction. It is governed by the Assembly of States Parties, as is the Court, but there is an argument that it is not part of the Court. Indeed, a 2007 amendment permits earmarking of voluntary contributions to the Trust Fund in a way that sets such donations outside the frame of the Court. Both are within the “Rome Statute system,” as ICC Prosecutor Fatou Bensouda and others term it, but they arguably are separate entities within that system.

Note too that the founding resolution does not seem to limit membership on the Trust Fund board of directors to nationals of states parties. Assuming later-promulgated regulations do not change this, that would make this board different from other elected positions, like ICC judge and ICC prosecutor, and again suggests a different status.

‘PROHIBITION ON USE OF APPROPRIATED FUNDS TO ASSIST THE INTERNATIONAL CRIMINAL COURT – Notwithstanding any other provision of law, no funds appropriated under any provision of law may be used for the purpose of assisting the investigation, arrest, detention, extradition, or prosecution of any United States citizen or permanent resident alien by the International Criminal Court.’

The phrasing begs the question whether there is a ban on U.S. funding in any instance in which the suspect or accused is not a “United States citizen or permanent resident alien.” It seems even more clear that funding reparations – aiding victims, without regard to perpetrators – is something wholly outside the scope of “investigation, arrest, detention, extradition, or prosecution.” By this reasoning, U.S. financial contributions to the Trust Fund for Victims, which has no role at all in “investigation, arrest, detention, extradition, or prosecution,” are not prohibited by the American Service Members Protection Act. (See further limits on the Act’s scope – including reference to unofficial reports of a confidential Office of Legal Counsel memo on the issue – at pages 6-11 and 17 of a 2010 American Society of International Law compilation of white papers, Beyond Kampala: Next Steps for U.S. Principled Engagement with the International Criminal Court.)

The above interpretation of the Act’s funding rules cannot be extended to subsequent legislation, by which Congress imposed a blanket ban on using appropriated funds “for use by, or for support of, the International Criminal Court,” unless and until the now-unlikely event that the United States ratifies the Rome treaty following 2/3 approval by the Senate. The latter amendment, however, defines “International Criminal Court” in much the same way as the above-quoted Section 2013(6) of the American Service Members Protection Act; thus the question lingers whether the Trust Fund falls within the scope even of the latter amendment’s ban. 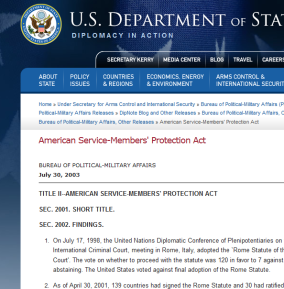 A final point respecting the American Service Members Protection Act: U.S. contributions to the Trust Fund would not contradict the intent of Congress, as it may be inferred from the Section 2002 Findings with which the Act begins. Donating to the Trust Fund for Victims in no way would enable the Court to pursue U.S. nationals or other “covered” individuals. It would have no relation to the ICC offense that appeared to give Congress most concern, the not-yet-fully-punishable crime of aggression. And with regard to Finding #4, which quotes the 1998 statement in which then-Ambassador David Scheffer opposed the Rome Statute on the ground that “‘[w]e are left with consequences that do not serve the cause of international justice,'” one discerns a congressional willingness to support institutions (such as ad hoc tribunals, which are exempted from the Act) that in fact serve that cause. U.S. contributions to reparations, via the Trust Fund for Victims, would meet that criterion.

Consideration of such contributions would further the United States’ current policy of positive engagement with the Rome system of international criminal justice. Reconsideration of all federal statutory barriers, a move supported by a range of U.S. experts (among them, Professor Kaye and former State Department Legal Adviser John B. Bellinger III), seems yet another logical next step.

‘Without serious attention to this issue the credibility of the international child protection system will suffer. We hope that the landmark ruling of the International Criminal Court in the Thomas Lubanga case sent a clear signal that grave violations will not remain unpunished.’

So write Catherine Ashton, High Representative  of the European Union for Foreign Affairs & Security Policy, and Leila Zerrougui, the Special Representative of the U.N. Secretary-General on Children & Armed Conflict,  in a joint statement. They published their message today because it’s the annual International Day against the Use of Child Soldiers, also known as Red Hand Day.