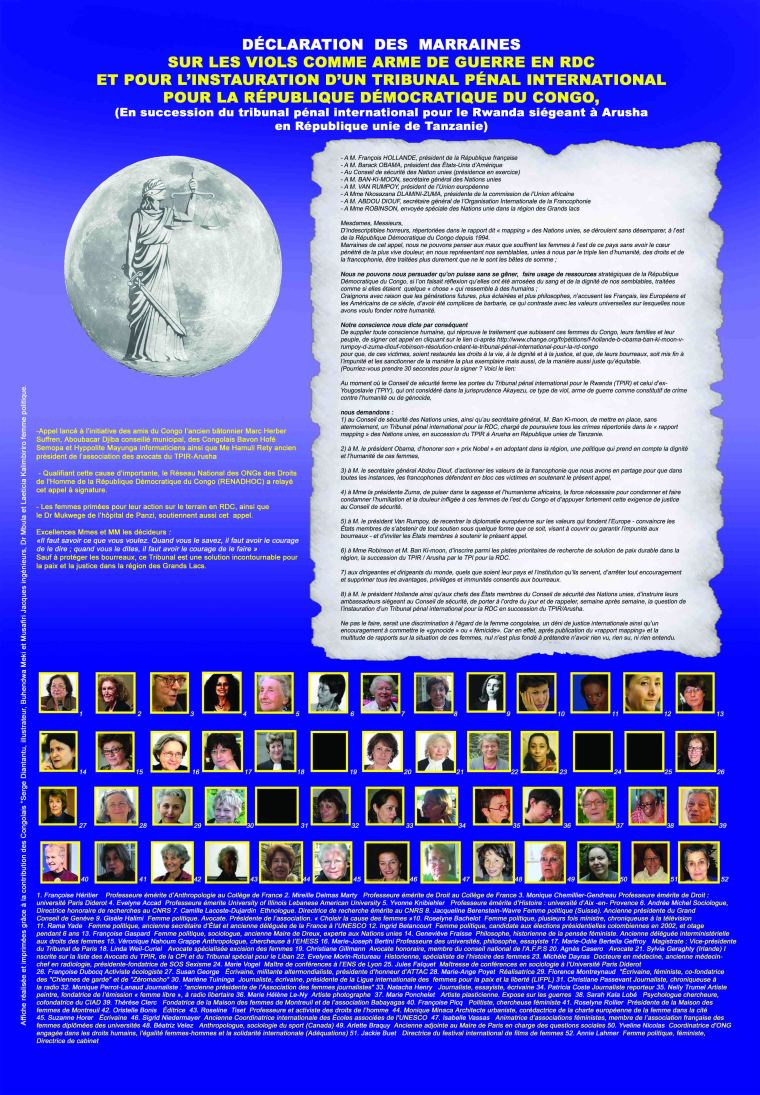 Supporters of a new ad hoc tribunal have taken their campaign online. As reported this weekend on any number of French-language media, 52 women signatories – dubbed marraines, or godmothers – have launched the above Petition for an International Criminal Tribunal for the Democratic Republic of the Congo. Addressees include: French President François Hollande; U.S. President Barack Obama; the Presidency of the Security Council; U.N. Secretary-General Ban Ki-moon; European Union President Van Rumpoy, African Union President Nkosazana Dlamini-Zuma; and Mary Robinson, U.N. Special Envoy on the Great Lakes Region of Africa, the region within which the protracted Congolese conflict has taken place.

This French-language petition focuses on the findings of a U.N. “mapping exercise” respecting human rights violations that occurred in the Congo between 1993 and 2003. (Notably, most of those violations predated the July 1, 2002, entry into force of the Rome Statute of the International Criminal Court; although not stated, presumably the absence of ICC jurisdiction over such cases forms one reason for the bid for a standalone tribunal.) The ensuing 500-plus page report, completed in 2010, documented the commission of many crimes of international concern against civilians – in particular, against children and women.

The petition envisages establishment of an ad hoc tribunal as a replacement to the International Criminal Tribunal for Rwanda, now winding up its work after 2 decades as a U.N. Security Council-established body. The full text of the 15-paragraph petition may be read here. In part, the marraines write (my translation):

‘We fear with good reason that future generations, more enlightened and more philosophical, will accuse the French, Europeans, and Americans of this century with complicity in barbarity – a complicity contrary to the the universal values on which we have founded our humanity.’

‘To do nothing would constitute discrimination against Congolese women, a denial of international justice and, as such, an encouragement to the commission of “gynocide” or “femicide.”‘

The initial signatories included Collège de France professors Mireille Delmas-Marty (prior post) and  Françoise Héritier, former French governmental ministers Rama Yade and Roselyne Bachelot, and many others. (Reportedly spearheading the effort is a man, however; he is Hamuli Réty, former head of the association of ICTR lawyers.) In the week or so that this website has welcomed additional joinders, more than a thousand more people have signed.