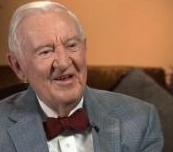 Margaret Mitchell got the Reconstruction Era all wrong. So said Justice John Paul Stevens in an address to the University of Georgia School of Law, the highlight of today’s Georgia Law Review symposium. Stevens, who retired from the U.S. Supreme Court in 2010, at age 93, spoke here in Athens at the university’s Chapel, used during the Civil War as a hospital for wounded Confederate soldiers – and afterward, as quarters for “Federal occupation troops.”

Stevens recalled a day in December 1939 when, as a junior in college, he and his family of Chicagoans watched the newly released adaptation of Mitchell’s epic “Gone With the Wind” from the balcony of an Atlanta theater. It was, as is well known, a Civil War story told from the perspective of a petulant, pampered, proslavery heroine, Scarlett O’Hara (below). (photo credits here and here) Stevens said that when the movie screen depicted Atlanta ablaze as a result of Union General William T. Sherman’s onslaught, the emotion of the assembled Georgians was intense. He reported:

‘I was afraid even to whisper a comment lest my accent reveal the fact that Yankees were in the audience.’

Stevens used the anecdote to introduce “Originalism and History,” the theme of his address. Resuming a refutation of originalism he had launched in 1985, in  response to a speech by then-Attorney General Edwin Meese (as I wrote in a Northwestern University Law Review article last year), Stevens stressed that “history is at best an inexact field of study, particularly when applied by judges.” For this reason, “the doctrine of original intent may identify a floor that includes some of the rule’s coverage, but it is never a sufficient basis for defining the ceiling.”

Atlanta-born Margaret Mitchell‘s version of the Civil War and its aftermath – a version that “influenced the thinking of millions of readers” – evinced sympathy for the antebellum South and hostility toward Reconstruction, Stevens said. Mitchell called the Reconstruction Republicans who controlled Georgia immediately after the war “incompetent and corrupt.” Stevens offered contrary evidence: the Reconstructionist governor reviled by Mitchell was acquitted of such charges and went on to become one of Atlanta’s leading figures, while the gubernatorial opponent whom Mitchell extolled is now believed to have been a leader in the state’s Ku Klux Klan. Uncertainty regarding that allegation served to underscore Stevens’ concern respecting judicial overuse of history:

‘The fact that the Klan’s activities were shrouded in so much secrecy has not only prevented historians from positively confirming that identification, but also explains why ambiguity characterizes so many important historical events.’

Another such event was the 1876 Presidential contest between Rutherford B. Hayes and Samuel Tilden. As he had in an August essay that the New York Review of Books titled “The Court & the Right to Vote: A Dissent,” Stevens pointed to the post-election withdrawal from the South of federal troops as a pivotal moment in American history. That moment might not have occurred, or might be viewed quite differently, absent a “‘reign of terror'” that suppressed the Southern Republican electorate, white and black alike. (Stevens drew the quoted phrase from a dispatch reprinted by his former colleague, William H. Rehnquist, in Centennial Crisis (2005).)

Today’s talk then moved beyond the Reconstruction Era, encompassing jurisprudential topics as varied as the Constitution’s religion clauses, the incorporation doctrine, the desegregation decision in Brown v. Board of Education (1954), and political gerrymandering. Discussed was the 2d Amendment right announced not long ago by a majority of the Court, as well as a same-sex sexual harassment judgment written by Stevens’ longtime sparring partner, Justice Antonin Scalia. Each example was deployed to drive home Stevens’ central point, regarding what he calls the sovereign’s duty to govern impartially: History is relevant but not dispositive. No less important to a judge construing terms like “equal protection” and “due process of law” is the contemporary social meaning of those constitutional phrases.

Has the Vatican read the Rome Statute?

US out of UNESCO: lose-lose proposition?